The Top 10 Most Amazing and Beautiful Caves in the World

The Top 10 Most Amazing and Beautiful Caves in the World 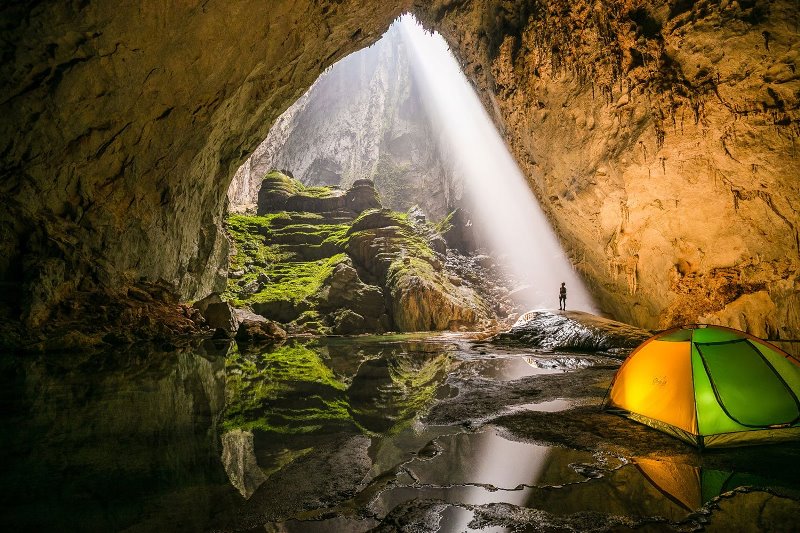 One of the most recently discovered caves on this list, Son Doong Cave, is located in Phong Nha-Ke Bang National Park, Viet Nam. Reportedly discovered in 1991 by locals who were allegedly afraid to enter the cave due to a whistling sound at the cave’s entrance, it gained international attention in 2009 when a group of British scientists explored its depths.

It was revealed that Son Doong Cave boasts the world’s largest known fast-flowing underground river and contains the largest subterranean cavern. Its largest chamber is about 660 feet high, 490 feet wide, and over 3 miles long—large enough to hold a city block of New York skyscrapers!

Son Doong Cave is so large that it has developed an interior microclimate that boasts an ecosystem unlike any other on earth. In addition to harboring a 262-foot stalagmite, the sheer vastness of Son Doong Cave’s largest chamber endows it with a spaciousness.

Cave of the Crystals (Chihuahua, Mexico)

Cave of the Crystals was located in 2000 by brothers Juan and Pedro Sanchez while they were drilling at the Naica Mine. Originally filled with water, the cave was drained to reveal an array of gargantuan selenite crystals growing across its chamber. The largest of these tree-sized crystals is 39 feet long and has a diameter of 13 feet.

The cave’s interior, which has since been allowed to re-flood to promote continued crystal growth, was so hot and humid when drained that the mineralogists and other researchers allowed to enter it had to wear refrigerated suits and cold-breathing systems while working in relatively short spurts to avoid passing out.

Part of the Waitomo cave system, Glowworm Cave is so named due to its native population of Arachnocampa luminosa, an insect that is naturally luminescent during its larval stage. Tours of this cave often include a subterranean boat ride that allows visitors to view the hanging glowworms from below while navigating an underground stream.

This cave system formed under an ancient ocean around 30,000 years ago and hosts some of the most impressive stalactite and stalagmite formations in the world. Some of these spleleothems, located in a cavern known as “The Cathedral,” reach nearly 59 feet. Formations of this size are relatively rare, as the average stalactite grows only one cubic centimeter every 100 years.

Beyond the initial ice caverns, 25 additional miles of limestone caves reach deep within Hochkogel mountain. These deeper areas of the Eisriesenwelt system are only accessible with permission from the Austrian Government.

Probably the best known cave system in the world, Carlsbad Caverns National Park is located in Southeastern New Mexico and draws over 700,000 visitors each year. Over 20 of the system’s cave chambers are large or unique enough to have been individually named.

One of the largest caverns in the system, referred to either as “The Hall of the Giants,” or simply “The Big Room,” is over 350,000 square feet. That’s over 5 times as large as the White House!

The Škocjan Caves have been a site of international significance for longer than most. Having been mentioned in documents dating back to the 2nd century BCE, this Slovenian system was declared a UNESCO World Heritage site in 1986 due to its importance as an underground wetland.

The cave itself is just over 2 miles long, but contains part of the Reka River, which continues to flow underground for an additional 21 miles. Together, this cave system and the Reka river comprise the most significant feature of Italy and Slovenia’s Karst Plateau.

Many of the chambers and features within Carlsbad Caverns were originally named by a teenager named Jim White who explored the caves in 1898 using a homemade wire ladder.

Located outside the city of Guilin, Ree
d Flute Cave has been a popular destination for locals and visitors alike for over 1,200 years. Its moniker comes from the abundance of reeds that thrive outside of its entrance. Historically, these have been used by locals to create flute-like wind instruments.

Like many of the formations on this list, Reed Flute Cave boasts an array of stunning rock and mineral formations, carbon deposits, and stone pillars. What sets it apart, however, are the phantasmagorical light installations that give this locale its other namesake: The Palace of Natural Arts.

Discovered in 1878 by Andrew Campbell, Luray Caverns quickly became known for its impressive size and diverse array of calcite-based spleleothems. A report created by cave scientists from the Smithsonian Institution stated ” . . . it is safe to say that there is probably no other cave in the world more completely and profusely decorated with stalactite and stalagmite ornamentation than that of Luray.”

Some as high as 10-story buildings, Luray’s vast and magnificent caverns are lined in certain areas with clear pools of water. The caverns of the system are connected by paved pathways that lead through 11 individual rooms, making portions of the area highly accessible.

The discovered portions of the caves beneath Mulu National Park, located in a rainforest in Malaysian Borneo, cover over 125 miles. Some caving experts posit that two-thirds of the system may remain as of yet undiscovered.

According to the Sarawak Forestry Department, Mulu Caves lay claim to the largest passage, largest chamber, and longest single cave in Southeast Asia. A variety of tours are offered within the Mulu system for both beginners and experienced spelunkers. Whoever said that there was nowhere left on Earth to explore must have forgotten to look underground!

Located in the heart of Kentucky, Mammoth is one of the oldest and most well-known caves in the United States. This cavernous behemoth boasts the longest cave system in the world, featuring over 400 miles of subterranean passageways.

Mammoth Cave was “discovered” by American settlers in the late 18th century, but was well-known to indigenous communities long before before the settlers’ arrival. It was made a national park in 1941, a World Heritage site in 1981, and an international biosphere reserve in 1990.

Check out The Top 10 Most Common Questions and Concerns in Son Doong Cave.