The once prosperous capital of the 700-year-old Lanna Kingdom in northern Thailand, Chiang Mai, is a quaint city. When going to Chiang Mai, you can see the perfect blend of peaceful northern, incredible mountains, and a host of Historic architecture and activities that await you to discover.

Energy in the city captivates those who visit, whether they are looking for a climbing adventure or a spiritual awakening as they discover from temple to temple. But beyond its boundaries, you’ll find the perfection of nature, awe-inspiring animals, and unique communities deep in the mountains. Explore the sights with our list of the top attractions in Chiang Mai.

Wat Phra Singh was built in the 14th century. It boasts beautiful classical Lanna architecture with its dazzling golden stupa and several teak temples, all located in the temple’s courtyard.

One of the most typical structures is the vast golden stupa that reflects sunlight in all directions. It’s so blindingly beautiful that you have no choice but to stare at it until your eyes ache. 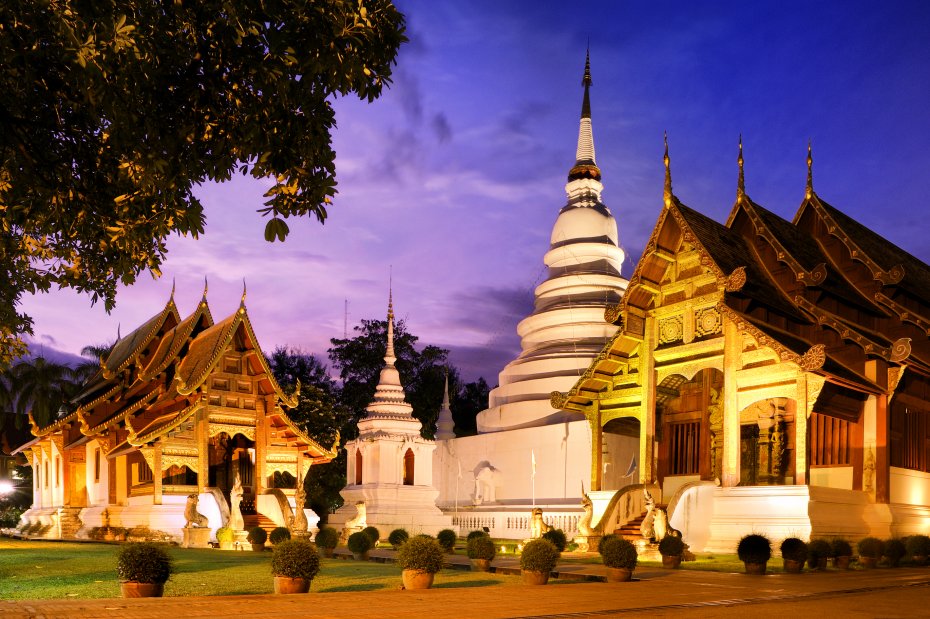 The temple combined the golden stupa, the main prayer hall, and the Lai Kham prayer hall containing the statue of Buddha Phra Singh from which the temple’s name is emanated. The Luang prayer hall contains the venerable Phra Chao Thong Tip Buddha. The open time of the temple is from 6 am to 8 pm, and you will have to pay 50 THB to enter the temple.

It’s one of the oldest temples in the city and was built in the 14th century. The temple is located just outside the north wall.
The temple is known for the massive stupa that dominates the area. It was built in the 16th century, and it is still in remarkably excellent condition compared to what you would expect from an old structure this old.

In front of the stupa, you’ll also find a Lanna-style temple built of teak and decorated with traditional Lanna-style wood carvings. This temple was recently restored and expanded.

In the beautiful teak temple, you will find a giant Buddha statue placed on the opposite side of the entrance. The pillars and walls have crimson, providing a unique Lanna-style atmosphere in central Thailand that you can’t find.

The open time of the temple is from 6 am to 5 pm daily, and you don’t have to pay to enter. You can ride a motorbike into the temple and park on the left or right when entering the temple grounds.

Before reaching the temple, you will first climb more than 300 steep steps to get to the temple from the parking lot. Once you reach the top, you will continue into the temple’s grounds to find a beautiful golden stupa surrounded by three halls containing several Buddha images.

Legend has once upon a time. A monk from Sukhothai owned the Buddha’s relic and present it to the king in Lanna. The dinosaur split into two pieces in the process, and one piece was kept at Wat Suan Dok. Another portion is why they built Wat Phra That Doi Suthep to store it. Keep the rest of the monument.

They decided to place the relic on a white elephant and set it free in the forest to locate this new temple. The elephant somehow made it to the top of Doi Suthep mountain before it collapsed and died, and that’s why the temple was built there in the 14th century.

The temple is open from 5 am to 8 pm, making it the perfect place to experience the sunrise or sunset over Chiang Mai. The entrance fee is THB 30 for foreigners.

Wat Pa Dara Phirom Phra Aram Luang is one of the largest temples in Thailand. The temple is full of high-class architecture, from pink and blue naga statues to a black temple with a golden top.

All the architecture you find here is recently built with very intricate details. From the scale of the colorful mythical creature statues to the carved murals on the temple’s walls, you can see that a lot of money and hard work went into building the temple.

Although the temple looks new from the outside, it is 100 years old due to the endorsement of Thailand’s 10th king. Due to a stream of donations from several local celebrities, the temple is expanding rapidly with more-leading architecture.

If you are bored seeing ancient architecture in Chiang Mai and want to see some of the top modern Buddhist architecture, then this is your place. The opening hours of Wat Pa Dara Phirom Phra Aram Luang are from 9 am to 5 pm. Essentially, there is no admission fee.

Elephant Jungle is an elephant rescue and rehabilitation center that you can visit and spend the day with the elephants. The center is wholly ethical and does not use hooks or chains or offer rides or shows.

A day trip to the sanctuary includes a pick-up from your hotel, an educational period to talk about elephants, feed and play with the elephants, and even a traditional Thai lunch. 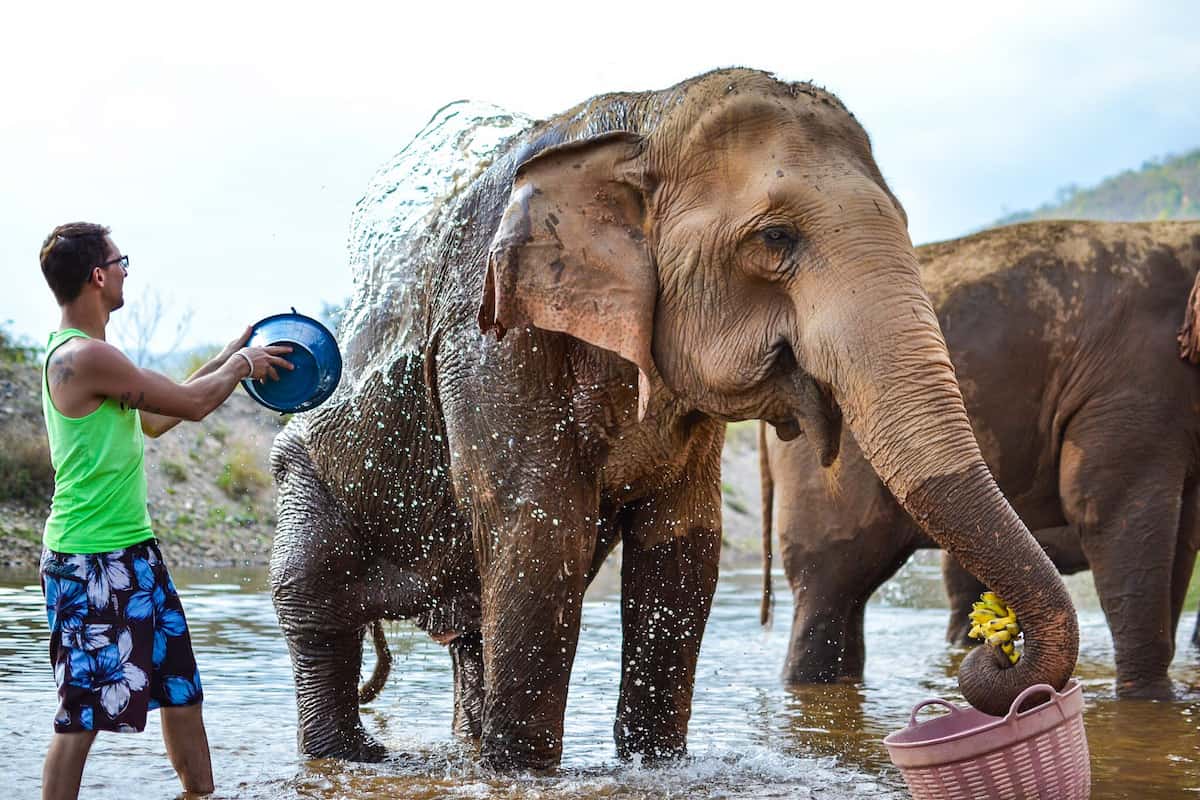 If not dubbed the “roof of Thailand,” you will not be able to ignore this national park. Typically, it would be a full-day tour, including several other stops such as Sirithan Falls, a tiny hill tribe village (Karen village), and Vachiratharn Falls.

At the attraction, walk along the Ang Ka nature trail and reach the highest point in Thailand at 2565 meters. Then go up to King & Queen Pagoda. Not only is the stupa stunning, but the area has the best views of the national park – one of the top things to do in Chiang Mai.

The weather is favorable. From November to February is the ideal time to visit Northern Thailand. It is the most beautiful and driest time of the year.

We visited Chiang Mai for the Yee Peng and Loy Krathong Festival in early November. It is a popular event that attracts thousands of tourists each year, making it one of the most vibrant times in the region.

NOV-FEB: As advised, November to February is the most comfortable time in Chiang Mai. Daytime temperatures range between 25°C (77°F) with a few days of rain. The Yee Peng Festival usually takes place every November, so you might want to plan your trip around there. If you like flowers, you might want to go to the Chiang Mai flower festival in February.

March to May is the hottest time in Northern Thailand, with temperatures often reaching 40 °C (104 °F). It’s not the most comfortable time to visit. Still, Songkran, or Thai New Year, is celebrated every April and turns the city into a giant water bottle.

HOW TO VISIT CHIANG MAI

By motorbike: In my opinion, it is the best way to get around Chiang Mai as you will travel quite a distance and go up the mountain to Wat Phra That Doi Suthep, which is quite far from the center city. For a 150 cc motorbike, the rental should be around 500 THB per day. You can also buy a 200 – 250 cc motorcycle for 700 THB. I highly recommend purchasing a bike with a 150 cc engine or more to ride the mountain roads in Chiang Mai.

By Red Song Taew: You can also visit red Song Taew road while walking around the city center. You can hope to pay around 30 THB/person when going anywhere within the city and approximately 50-60 THB/person. You can use them as a taxi by directly asking the driver and agreeing with a price, and you can sit up front like a taxi driver. 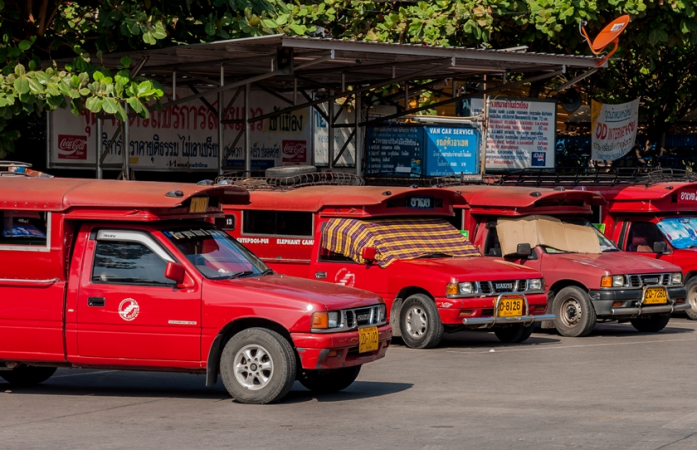 By airport shuttle service: With this type of service, you will have to book a car in advance on international ride-hailing apps (MyTravelThru, Mozio, WelcometoPickups,…). Especially if you book a vehicle at MyTravelThru, we serve you as a god. We have a refund policy when the trip is delayed for a good reason. You are sure to have someone to pick you up anywhere. The car line also depends on your choice. Prices are very competitive, we inform cost for the customer before booking, so you never have to worry about being overcharged by the driver.